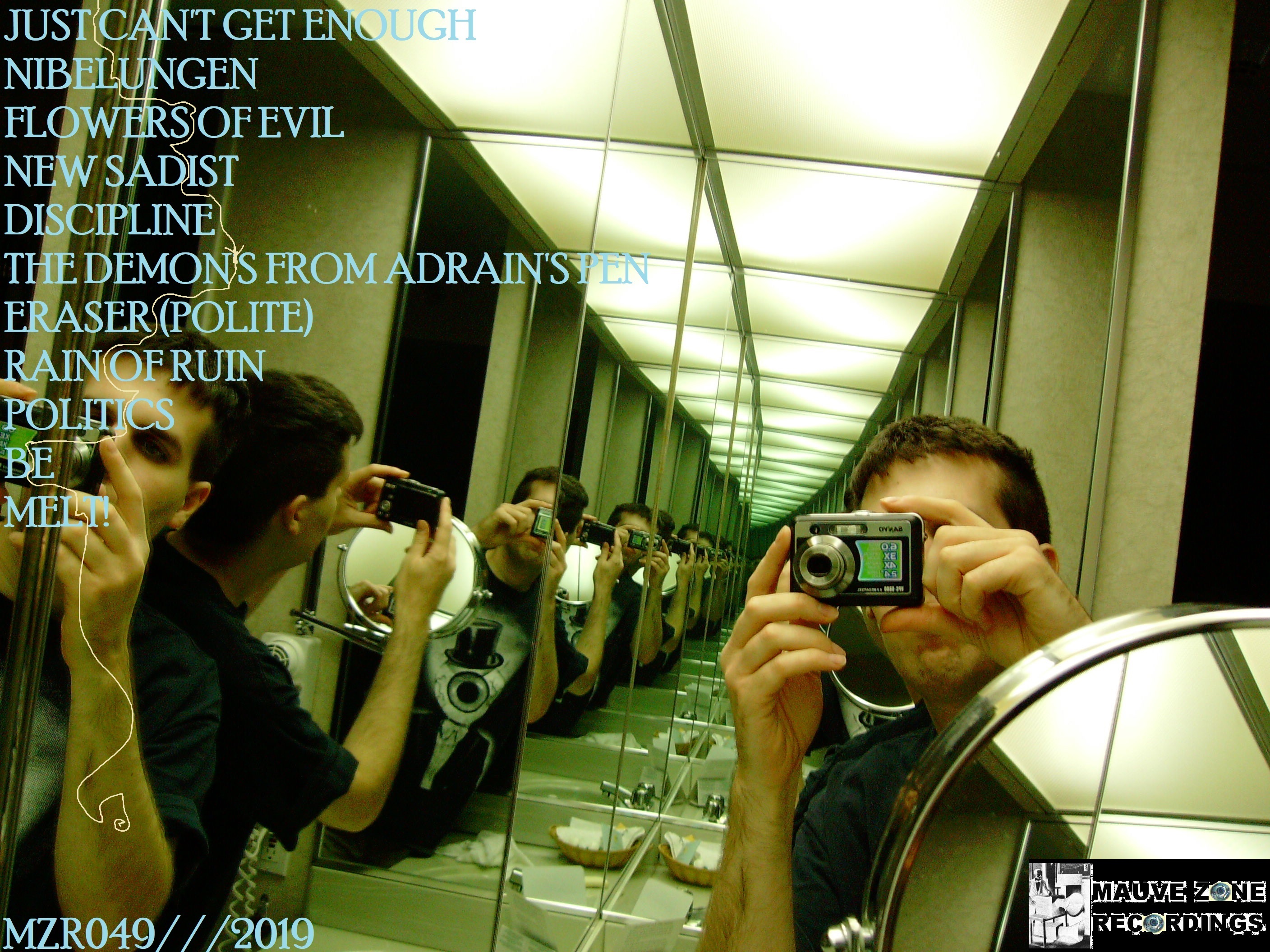 8. Rain of Ruin (5:02) original by Suicide/ interpreted by Sypha Nadon

11. Melt! (3:24) original by Siouxsie & The Banshees/ interpreted by Sypha Nadon

1.    Just Can’t Get Enough: This is a cover of the classic Depeche Mode single “Just Can’t Get Enough,” and it was Sypha Nadon’s first cover song. At the time it was one of those rare Sypha Nadon songs to actually employ vocals. It was recorded in the summer of 2002. This song probably uses more samples than any other Sypha Nadon song. The industrial noises that appear at 1:26 and 4:38 are from the first Einsturzende Neubauten album. The female choir sample that appears at the 1:58 mark are sampled from the Current 93 song “Jesus Wept.” The sample that begins at the 6:25 mark and which ends the song is taken from the very end of the song “The 150 Murderous Passions Part 2” by Whitehouse/Nurse With Wound. Aside from the singing, I also provided the weird voice at the start of the song, the laugher that begins at the 4:20 mark, and the weird distorted scream that begins at the 5:00 mark. This song appeared on the “GAP” reissue album as a bonus track.

2.     Nibelungen: I created this song in 2002. It features a vocal “appearance” by Nico. Basically, I took her acapella performance of her song “Nibelungen” and dropped it into some backing music that I had created. The weird snuffling noises that appear in the first part is my own voice. This song was first recorded for the “Society of the Spectacle” album in 2003 and would go on to appear on the “Universe B: Beyond” anthology, and would appear (yet again) for the reissue album of “Society of the Spectacle.”

3.     Flowers of Evil: An odd non-electronic acoustic song in which I read the opening poem “To the Reader” of Baudelaire’s classic poetry collection “Flowers of Evil” while strumming an acoustic guitar (this is in fact one of the very rare Sypha Nadon songs to employ acoustic guitar). The looped humming sound in the background is my own voice. This track first appeared on the “Society of the Spectacle” reissue anthology as a bonus track.

4.  New Sadist: I recorded this song under the Boy Destroyer banner but it never actually appeared on any of the Boy Destroyer albums, thus making it an unreleased track. The background noise would later be reused for the “Raped by a Deer” song on the Boy Destroyer “Rise Horus Rise” album. I assume it was recorded sometime around the years 2006-2008.

5.     Discipline: Another song recorded under the Boy Destroyer banner, it first appeared on the “Wild Boys” EP of 2008.

6.   The Demons From Adrian’s Pen: This song is dedicated to Bobby Prince, who did the MIDI music for the first “Doom” games (and who has always greatly inspired the Sypha Nadon sound over the years). This song was actually an attempt to cover one of Prince’s “Doom” songs, entitled ‘The Demons From Adrian’s Pen,” which plays in the background during the second mission of Doom’s 2nd episode (“Containment Area” being the actual name of the mission), but it ended up turning out slightly different than expected (the beat in particular sounds very unlike the original). It was recorded in 2016 and first appeared on the Death Head Moths album Second Report (where it appeared under the name “Bobby Prince”).

7.    Eraser (Polite): It was a Coil remix of the Nine Inch Nails song “Closer” (which appeared during the opening credits of the film Se7en) that served as my primary inspiration to begin recording electronic music of my own. It seems only fitting, then, that now I do this song, a cover of Coil doing a remix of the Nine Inch Nails song “Eraser” (as heard on the NIN remix album “Further Down the Spiral,” where it was known as the “Polite” mix). Lyrics by Trent Reznor. This song first appeared on the 2016 compilation album Beyond the Mauve Zone.

8.   Rain of Ruin: This song is a cover of “Rain of Ruin” off the Suicide album Way of Life. Recorded in 2018, it first appeared on the Sypha Nadon album Pleasant Songs.

9.  Politics: This cover of the Whitehouse song “Politics” (from their album Total Sex) was recorded specifically for this project in 2019.

10.Be: This cover of Current 93’s song “Be” (off their Imperium album) was recorded specifically for this project in 2019. Like “Flowers of Evil,” it’s one of the rare Sypha Nadon songs to utilize an acoustic guitar.

11. Melt!: A cover of “Melt!” by Siouxsie & The Banshees that was recorded specifically for this project in 2019. The background sample that starts at the 7 second mark is the sound of an ice cube melting, recorded at a lower pitch.